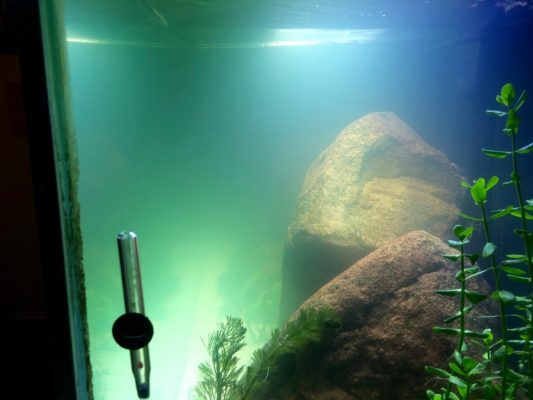 Cloudy Water – out of nowhere?

Cloudy aquarium water is typically a result of

Disclaimer: There may be other factors resulting in a bacterial bloom. These are our most commonly seen examples.

This cloudiness is called a BACTERIAL BLOOM.

It is evidence of an imbalance between the beneficial bacteria (that digests waste) and waste.

It can be assumed that, if the water was to be tested, the test would show that waste (toxic Ammonia & Nitrite) is present in the water.

In an ideal mature aquarium you shouldn’t be able to read Ammonia (NH3/NH4) or Nitrite (N02) on your water tests as these waste chemicals are usually broken down immediately by the beneficial bacteria that lives in your gravel and filter.

Both chemicals are poisonous and when in high enough concentrations that you can measure them on a test, they will harm fish, shrimp, snails and more importantly the beneficial bacteria that is designed to digest it (Imagine randomly eating 3kg of chocolate for breakfast then trying to function for the rest of the day!).

Now you don’t want to go and clean out the aquarium in all it’s entirety, doing massive water changes and the such, as this just causes more problems. You’re losing even more of the good stuff! This is practically the reset button of the aquarium and generally should never be done (exceptions include dealing with chemical pollution – e.g deodorant sprayed near tank, child pouring coca cola into tank, etc).

You need to detoxify the Ammonia/Nitrite (waste) so that the bacteria can start again to digest it and the aquarium can then get back upon it’s feet again. Detoxifying waste means that it still exists within the system but is temporarily converted to a ‘safe’ form, which means it’s not poisoning fish and bacteria living in the tank. 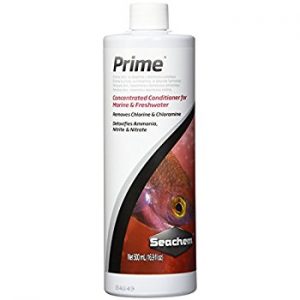 The best tap water conditioner (removal of Chlorine & Chloromine) in the market and the best first aid to problems with Ammonia & Nitrite.

When treating new tap water Prime converts chlorine and chloromines to ‘Free Ammonia‘ (the non-toxic kind). This actually means that if you dose lots of it into a tank with a high Ammonia reading, it will convert it into Free Ammonia. Therefore, removing the toxicity of the waste entirely! This also works with Nitrites and Nitrates, meaning that the aquarium can become temporarily ‘safe’ without any serious intervention.

How You Can Use It

Using an increased dose of Prime to your aquarium (e.g for 100 litre tank dose for 200 litre) every 48 hours will convert Ammonia/Nitrite to a non–toxic form so it can be digested by beneficial bacteria. In some emergency situations, with very high Nitrite concentrations, up to 5x the aquarium capacity can be treated (e.g. 50litre tank – 250litre’s worth of treatment – about a cap and a quarter of Prime). Over time, the Ammonia and Nitrite won’t be readable on a liquid test kit and the tank can finally get back on track.

Adding in some Filter Bacteria treatment such as ‘Stability‘ during these issues will also help sweep away excess waste. 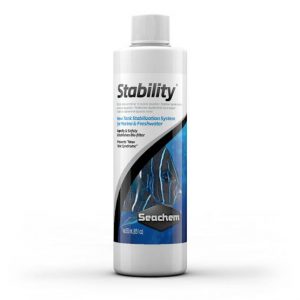 Example for an aquarium at 50 litre capacity. The dosages you use should reflect your aquarium size. In this example, the water is cloudy but isn’t getting cleared by water changes or by the filter, it is therefore a BACTERIAL BLOOM. Ammonia and/or Nitrite is measurable on a test kit and is therefore at a toxic level.

As always, contact us if you have any queries.

4 thoughts on “Bacterial Bloom, Cloudy Water, Ammonia/Nitrite Spike – What do I do?”