In the first post we gave a brief run-through of the main groups of cichlid found in Lake Malawi in Africa, with reference to their specific behaviours , diets, and keeping Malawi Cichlids -Ppart 1 of ‘Introduction to Malawi and Tanganyikan Cichlids’ can be found here.

Here, we intend to focus on the other major African lake within the Rift Valley, Tanganyika

Tanganyika is the longest freshwater lake in the world (420 miles), and the second deepest after Lake Baikal in Russia. Tanganyika is 1,433 meters (4,700 ft/0.9 miles) deep (with 3 miles of silt and mud lying on the bottom) whereas Lake Baikal lies at 1,632 meters (5,354 ft/1.01 miles). The very nature of this depth means that many wild-caught fish need to be slowly put through decompression procedures when brought to the surface so they don’t suffer the fish equivalent of the bends!

Due to the size and depth of the lake (which is more or less oceanic), more than 400 species of endemic fish inhabit Tanganyika, including 250 species of cichlid. The age and isolation of the water has also driven the evolution of many unique species of crabs, sponges and jellyfish.

As with Malawi cichlids, Tanganyikans can be loosely catergorised into a few major groups; Rock  Dwellers (Such as Lamprologus, Tropheus and Julies), Sand and Shell Dwellers (such as ‘Similus‘), Deep Water Predators (such as Frontosa) and open water Sardine Cichlids (such as the famed Blue Neon Cichlid)

Most Tanganyikans stay around 20cm in maximum length, bar a few particular species, most notably the largest cichlid in the world, ‘Boulengerochromis microlepis’ or the ‘Giant/Emperor Cichlid’ with the largest recorded specimens measuring around 1.8ft (21.65″). 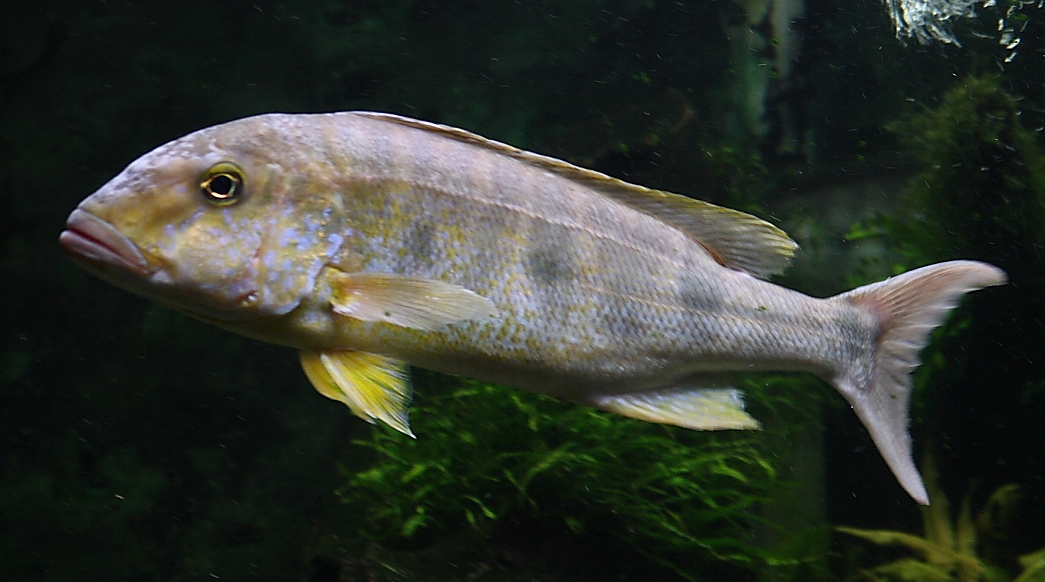 The section primarily focuses on the Rock Dwelling Tanganyikans. Rock Dwellers can be further broken down into Lamprogines (the ‘Lamprologus’ family) and the larger algae-eating mouthbrooders such as Tropheus. The latter of which share both behavioural and dietary habits akin to the Malawian Mbuna (see Part 1).

Tropheus eat algeal strands that grow on rocks, and the small invertebrates that live within it. This is most often referred to as ‘aufwuch’. It is therefore important to allow natural algae growth within the aquarium. Herbivorous fish by their very nature require a diet of around 75% vegetable and algae matter and 25% protein so it is important to supplement them with specialised cichlid pellets that provide protein.

Ideally, an aquarium housing Tropheus should be over-stocked and densely aquascaped with rocks in order to limit their excessive aggression in defending their algae supply and competing over females.

Although easily hybridised, there are currently six classified species of Tropheus (seen below).

In some instances, juveniles of a particular species can appear completely different to their parents. Below, an example of a baby and adult Tropheus Duboisi. The speckled coat provides camouflage in their dark rocky habitat before they mature and are able to defend their territory.

As mouthbrooders, Tropheus carry their young in a pouch inside their mouths during early development to ensure the fry’s survival and strength. For more information on mouthbrooders please visit our dedicated article here.

The family of Lamprologus contains arguably the most popular selection of Tanganyikan cichlids. They are smaller and arguably hardier than Tropheus but can demonstrate a similiar tenacity over their territories and fry. Brichardi and Lelupi (Lemon Cichlids) are two notable examples of this group.

Lamprologus are easy to breed and whether you begin with a mixed group of juveniles or some male and female pairs, providing that the water’s pH is hard (8.2+) and there are lots of rocky outcrops, you may begin to see some courting behaviour as the cichlids begin to mature.

Although they are not mouthbrooders like Tropheus, these fish are excellent parents  and will lay eggs in a cave or flat area, defending them until the fry are mature enough to fend for themselves.

Lamprologus are omnivorous so require a good supply of both proteinous live/frozen food and balanced flake or pellets.

Julidichromis are an excellent addition to any Tanganyikan setup. Although initially shy they are very curious fish and are fascinating to watch as they navigate their environment. They stay close to their rocky homes and will, unlike most cichlids, form monogamous life-long pairs and large families.

Pairs will develop independent territories and may become a little aggressive towards other fish around spawning but this is mainly just to scare other fish away. Usually when dealing with the excess aggression of Rift Valley cichlids, aquarists will often move around decor in the aquarium in order to ‘reset’ territories and temporarily stunt their rampage. In the case of spawning Julies, however, all decor should be kept as it is, otherwise the dominant of the two may attack the other out of stress.

The wild diet of a ‘Julie’ is primarily snails and small invertebrates although they will also peck at ‘aufwuch’ on rocks. This can be replicated with small granule food, the occasional snail, frozen daphnia and mysis.

Also look out for Part 4: Deep Water Predators and Part 5: Sardine Cichlids in the near future!